In the first incident, police say, Tamir had been standing with three others – Darren Johnson, 16, Logan Meintjies, 21, and Pedro Petersen, 15, – on the corner of Cadillac and Riley streets, at about 8.30pm, on Thursday February 25 when a white Chevrolet drove by. The driver allegedly made a U-turn and the passengers opened fire on the teenagers as the car made its second passing.

Paramedics declared Tamir dead on the scene while Logan, Pedro and Darren received treatment for their injuries.

“At this stage the investigation is ongoing; the possibility that this incident might be gang-related will be investigated. No arrests have been made,” said Mitchell’s Plain police spokesperson Sergeant Jerome Voegt.

Tamir’s grandmother and guardian Janet Swart, 61, was with him on the scene while he died.

“He was a quiet child, greeting everyone he knew when he was outside,” she said.

Tamir’s mother, Samantha Mitchell, 40, said that he had just started at Beacon Hill High School and had only been at school for two days before he was killed. Ms Mitchell was not at home when Tamir was shot.

Ms Swart said she had heard the gunshots and ran outside to see what had happened, but turned back when the white Chevrolet drove down the road. She only returned after the car disappeared and she heard her neighbours shouting that it was Tamir who had been shot.

She waited with him for the police and paramedics to arrive.

“I don’t know anything but I know he went to his friends before he got shot.”

Ms Mitchell said after her mother called her about the shooting, she immediately returned home from work in Montagu.

“We had to identify his body the next day. His eye was out of his face and it was swollen. He didn’t deserve to die like that, justice must be served for him,” she said.

She said gangsters should be dealing with gangsters and not killing innocent children.

“It’s not fair. His whole life was taken from him. After my son’s soul was taken, now the police visibility picks up. It’s too late. It won’t bring him back. My son knew what was right. He wasn’t a gangster, he was a disciplined child,” she said.

Principal at Beacon Hill High School, Gregory Kannemeyer, said they were devastated by the sad and tragic passing of Tamir.

“Beacon Hill teachers and staff offer our heartfelt condolences to his family and friends. We urge the community to rally together against the merciless killings of our youth. We will offer as much support as we can to end this scourge against our society. We will not forget you,” he said.

Morgan’s uncle, Brimley Munnik said he got a call from a neighbour about the second shooting. He went to the scene and was asked to identify Morgan’s body at the scene but when he arrived, he found Tamir’s body instead. Law enforcement then escorted him to the scene of the second shooting, on the corner of Cadillac and Austin streets, with Morgan’s mother Melanie Munnik, 41, and several residents accompanying them.

“It was difficult. As I closed him up to go, we could hear the outbreak of cries from the community. They were all in disbelief. We prayed before his body was taken, some community members stood with us until 1am before we all dispersed. We are so grateful to them for staying with us,” he said.

Morgan had started his matric year at Aloe High School and his memorial service will be held today, Wednesday March 3 at 6.30pm, on the field in Austin Street, Beacon Valley. Tomorrow, there will be a candlelight vigil and walk to the place he was shot.

Meanwhile, Logan, who was shot in the chest and left upper arm, is in hospital and they have drained blood from his lungs.

“Logan can’t remember anything All we want for him is to get better. We haven’t had time to think about this and process it yet because Logan needs all the help he can get in this time,” said his dad Daniel Rubain.

Darren, a pupil at Mitchell’s Plain School of Skills, was shot in his legs and admitted to hospital.

His mother, Candice Johnson, 43, said she had heard gunshots in the evening, and rushed to the scene along with other residents. Darren’s five brothers ran to him, and Darren complained about the pain in his legs.

“Police and the ambulance took a very long time to get to the scene. I was worried. We are just glad he is alive,” said Ms Johnson.

In response to the shootings, the Department of Community Safety will be expediting the rollout of additional law enforcement and violence prevention efforts through the establishment of Area Based Teams (ABT) in communities most affected by violent crime.

Mitchell’s Plain will be included in the second phase of ABT rollouts and will temporarily have a deployment of LEAP law enforcement officers, which they hope to make permanent, said Community Safety MEC Albert Fritz.

Mr Philander said they would continue to deal with the crime in the community. “These boys are victims of this problem. It is an ongoing journey we will follow with the families,” he said.

“Innocent people are being mowed down by urban terrorists annually and they operate in their own law. Police and elected officials should bring them to book with all their power,” he said.

The Cape Coloured Congress, Fadiel Adams said more than 300 people had marched to Mitchell’s Plain SAPS and had held a prayer gathering on Sunday February 28.

“We want the promises made by politicians to be kept to our community. Our demands are not unreasonable. We condemn this inhumane act, parents cannot continually bury their children. We should stop looking to the government and come up with our own solutions. The community must be given an opportunity to express their dismay,” he said.

Mitchell’s Plain sub-forum chairman Adam Van Wyk said it was sad for the entire community. No arrests were made, it’s unacceptable, he said. “We are supporting the family the best way we can,” he said.

Pastor Leon Jacobs of Kingdom Christian Church was asked to host an open-air service and held two – on Friday February 26 and Sunday February 28.

“It’s a very emotional time for us. We prayed for the young boys of our community. There is an attack on our boys. We’re in the frontline. We can’t sit still, the government needs to wake up,” he said.

Ayesha Kelly’s family also came out to support the families. She was shot in the back when rival gangs opened fire while waiting to be served at the tuck shop close to her home, (“Caught in the crossfire”, Plainsman, December 11 2020). 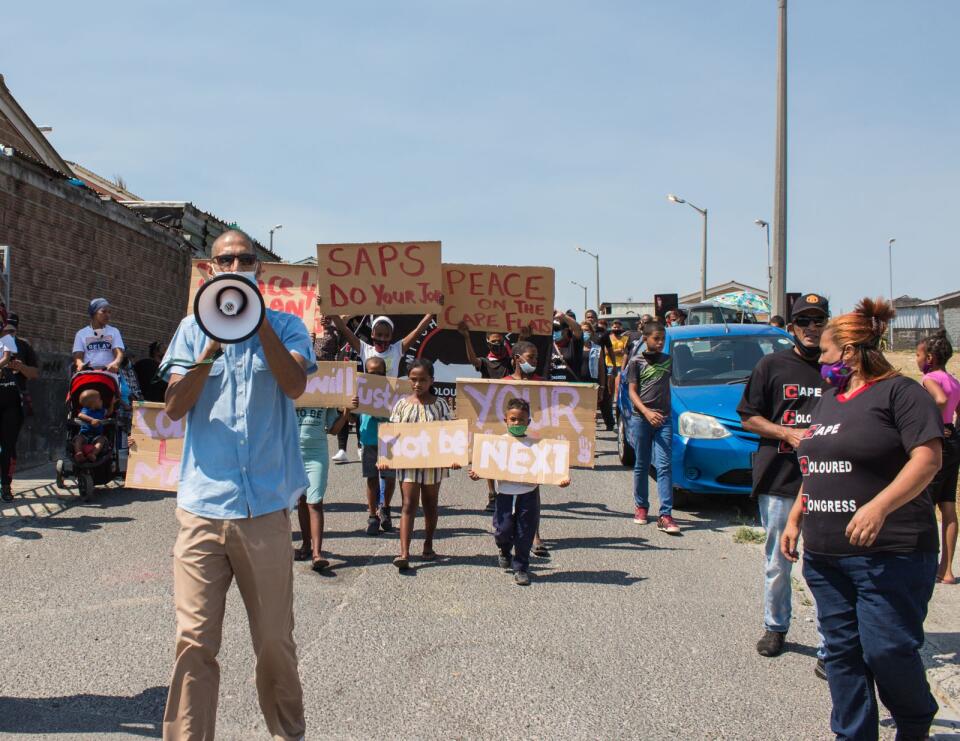 1/4: Residents support a march by the Cape Coloured Congress in response to the shootings. 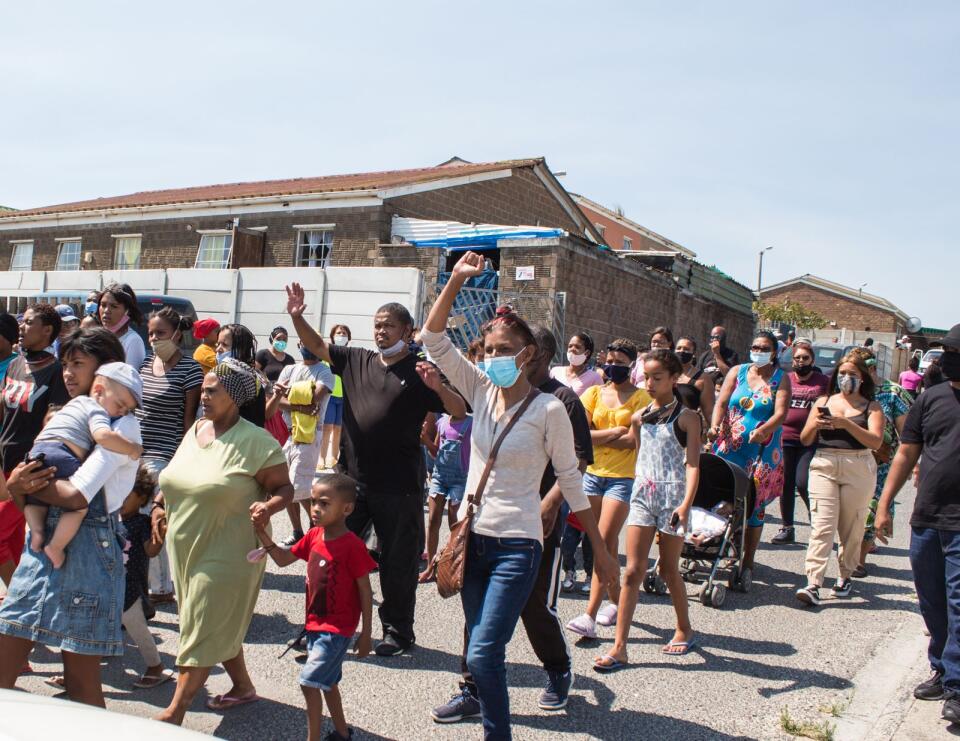 2/4: Residents support a march by the Cape Coloured Congress in response to the shootings.

3/4: Residents support a march by the Cape Coloured Congress in response to the shootings. 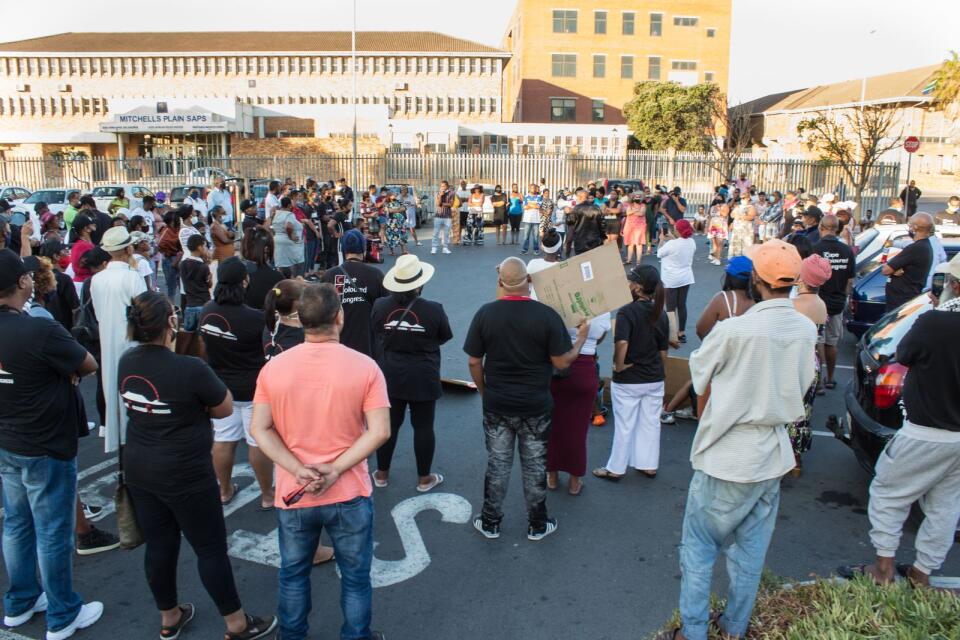 4/4: The Cape Coloured Congress held a prayer meeting opposite the police station in response to the shootings.