The Tafelsig Placemaking Initiative is close to being completed.

The mural art project aimed at getting the community to take ownership of open spaces in the area was launched on Saturday July 13 2019, on the corner of Kilimanjaro Street and AZ Berman Drive, next to the Nelson Mandela Youth and Family Centre.

The first part of the mural has been completed and work on the second mural will start soon, said Michael Bell, founder of Mitchell’s Plain Online and The Tafelsig Placemaking Initiative.

In September 2018, the community applied a base coat of paint to the walls in preparation for the artwork but could not continue the painting as they needed approval from the City of Cape Town.

In May 2019, Mr Bell, received approval from the City of Cape Town and support from various stakeholders.

The project, at the time, had no funds available to resume with the artwork. However, Our Future Cities secured funding for the artwork, said Mr Bell..

The spaces being used are the two corners close to the Thusong Centre, Nelson Mandela Youth and Family Centre in Tafelsig.

Rashiq Fataar of Our Future Cities; Wesley Nash a professional architect; and urban designer Maxwell “Mak1One” Southgate are working with the community to complete the project.

Resident John Rudolph has been rallying the City of Cape Town to maintain the two parks and provide light in them. He also waters the plants and keeps the parks free of those engaged in antisocial behaviour, said Mr Bell.

“The idea was to identify young and upcoming mural artists in the community that would work alongside Mak1One on the two murals. The two artists, Alfonso Williams and Angelo Waterloo, are also being mentored by Mak1One for the duration of the mural. They also receive a stipend for working on the mural,” said Mr Bell.

Ultimately, they hope to create a street art gallery along AZ Berman Drive featuring the work of local mural artists, he said.

Alfonso Williams, 37, from Tafelsig sketches, paints and decides on the colour scheme of the mural work. He has been doing graffiti work for over four years.

Mr Williams is a recovering drug addict and alcoholic. “I made some bad choices in my life. It wasn’t easy but I did the best I could to leave that life behind me. I have been clean for more than nine years.

“My friends and family helped get me to where I needed to be,” he said.

Angelo Waterloo, 32, from Tafelsig said he has been helping Mr Bell with community work for many years.

“Mr Bell told me not to give up, it was challenging keeping the garden going. I cleaned the garden but at night the elements would ruin it. The community helped me keep the garden to what it is today,” he said.

He too was a drug addict.

“I had to make a decision to not follow this path, I was getting older. There are many children growing up in the community and they needed my help. I throw myself into the community so I can help where I can, helping people in the same situation as me,” said Mr Waterloo.

Beacon Valley artist Maxwell “Mak1One” Southgate is an art teacher who guides the community’s participation in the artwork.

“Mr Bell and I have been working on bringing this project to fruition with partner Our Future Cities for the past three years. This project is not about me, it is those who live in the area who make this project possible through their participation and support,” he said.

“My journey, growing up in Mitchell’s Plain is similar to theirs,” he said of Mr Waterloo and Mr Williams.

“Our journeys are similar to many generations before us. We are trying not to repeat the life experiences we don’t need,” he said.

Mr Williams and Mr Waterloo were achieving great things and learning to overcome their own challenges, said Mr Southgate.

“They’re a good example to their families. It’s not easy at times of adversity to put a smile on their faces. Their journey is but a small part of great things,” he said.

People need to be a beacon for their community and shine bright.

“Mitchell’s Plain is my classroom, I’ve painted many walls in Mitchell’s Plain. One must always know where you come from. Once you’ve mastered a skill you must return and give back so the next generation can flourish and do better than before,” said Mr Southgate. 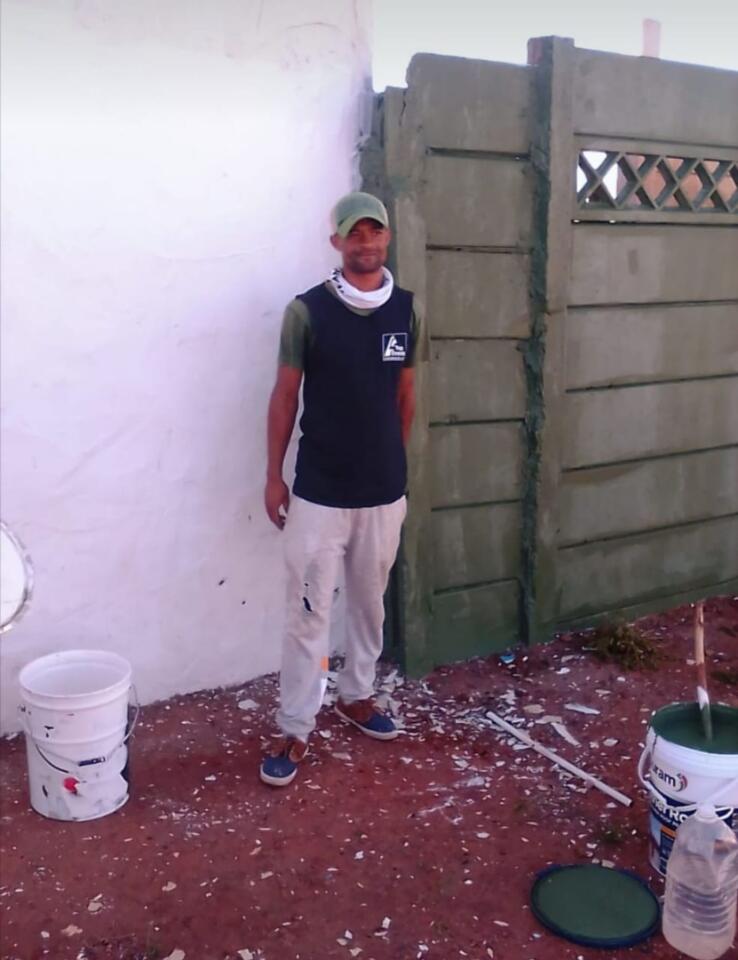 1/3: Angelo Waterloo prepares the wall on the corner of Kilimanjaro Street and AZ Berman Drive, Tafelsig. 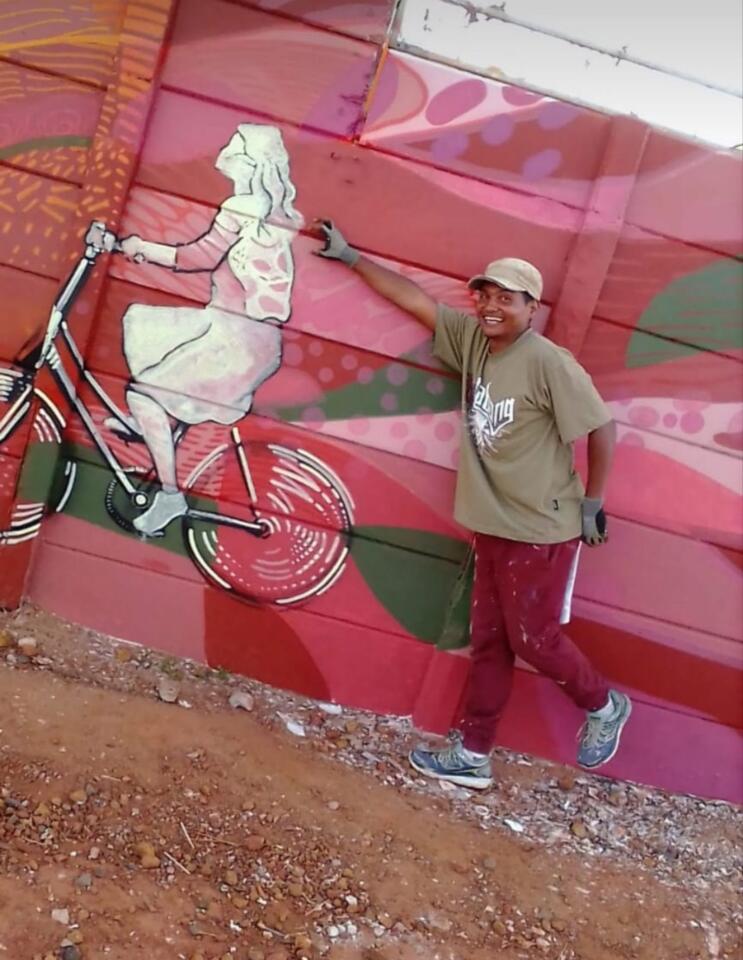 2/3: Alfonso Williams in front of the mural. 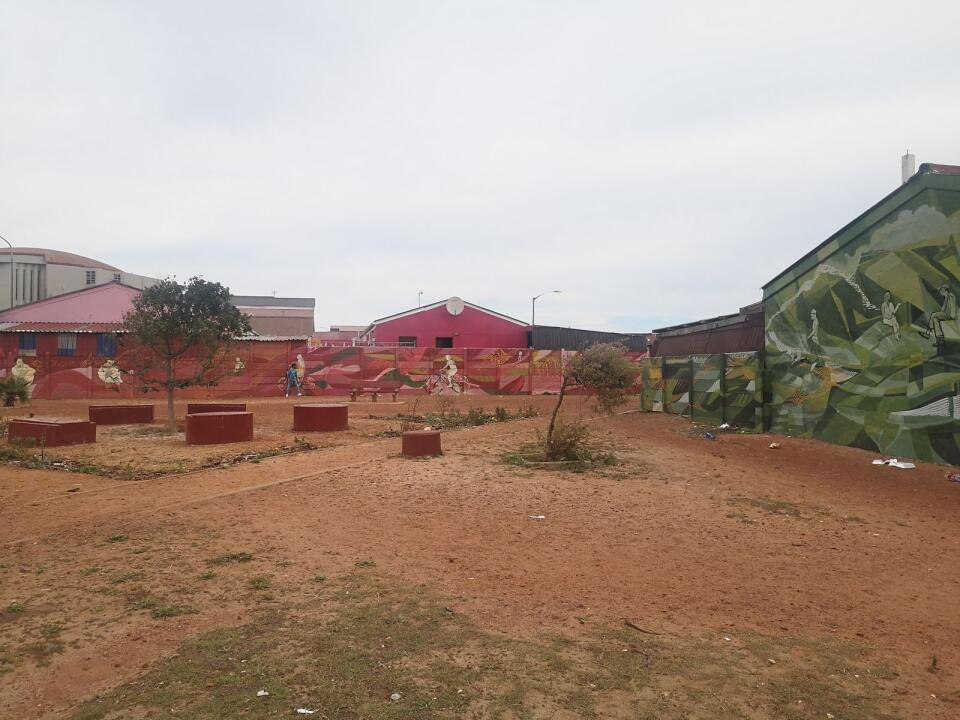 3/3: The painted murals and garden on the corner of Kilimanjaro Street and AZ Berman Drive, Tafelsig on Saturday April 24.